Firstly, this virus has created a profound Social Impact. All the affected Nations across the world have uniformly adopted the practice of Social Distancing. People are required to maintain a  distance  of  more  than  one  meter.  This  has  created  many  emotional problems for several people. Televisions continuously telecast  pictures  of  crying  children  who  cannot  go  near  their  parents. Social Distancing has made travel very restrictive such that only one person can travel in motorbike, only two persons can  travel  in  a  car  etc.  All  travels  through  Public  Transport  System  by  air,  road,  rail  or  water  have  been  banned.  Many  have committed suicide due to social distancing and shut down.

Secondly,  all  the  Governments  of  the  world  have  enforced  Shutdown  or  Lockdown.  Some  countries  have  enforced  this  rule ruthlessly including India by implementing section 144 of the Criminal Procedure Code 1973. Certain jokes were doing the  rounds  that  Lions  are  let  out  on  the  streets  in  Russia  so  that  people  will  remain  inside  their  houses  fearing  attacks  from  Lions.  In  China  several  houses  in  the  affected  areas  have  been  sealed  so  that  people  cannot  come  out.  Several  countries  have  reported  many  numbers  of  suicides  including  India.  There  were  many  who  could  not  get  their  needs  met  because  of  shutdown.  The  healthcare  sector  is  so  focussed  on treating corona infected persons that the persons affected by other kinds of illness are being turned away from hospitals. There  are  instances  that  some  hospitals  have  sent  away  dialysis patients for want of beds and other needs.

Thirdly, the unemployment levels have started shooting through the  roof  and  the  unemployment  rate  is  growing.  According to  one  report,  in  India  under  the  unorganised  sector,  nearly  44  crore  people  are  daily  wage  earners  and  small  roadside  vendors including people having small eat outs, tea stalls etc.All these people have lost their jobs due to shut down. Several million  employees  in  the  organised  sector  such  as  Aviation,  Tourism, Hospitality Industry, Auto and Retail Industries have also lost their jobs. Even major industries, apart from medium, small scale and export industries have shut down and laid off their  employees  contributing  to  escalation  of  unemployment  levels. Many such people face the threat of starvation.

Fourthly,  the  economic  impact  has  been  unprecedented.  COVID-19  has  triggered  an  unusual  recession  in  all  affected  countries  including  India.  Indian  overseas  investments  have  also declined. The impact has risen from several sides. Due to shut down the demand side for goods and services has been severely dented. According to Asian Development Bank study the Personal Consumption losses in India would be about $29.9 Billion (Losses Due to Decline in Retail Trade). The supply side impact has also been profoundly negative. Even the permitted essential industries which are allowed to operate during shut down do not get their supply needs. The impact on financial markets is unbearable. The market cap loss on one day (12thMarch  2020)  exceeded  rupees  10  lakh  crore  due  to  sharp  decline  in  the  stock  market  indices.  The  International  Trade  has also been adversely impacted. According to the UNCTAD study,  the  decline  in  the  global  value  chain  due  to  reduced  exports would be nearly $50 Billion. According to FICCI study, more than 70% of all businesses would be affected, nearly 80% of all businesses have reported reduced cash flow, more than 60% of supply chain affected, the Aviation Industry has suffered globally to the extent of $113 Billon due to passenger revenue loss and many Companies have been pushed to bankruptcy. Virgin Australia has already filed for Administration. The price of crude oil in the American market has fallen to negative level (Below  Zero)  though  it  is  slowly  recovering.  The  investments  in India through Participatory Notes have fallen to the lowest level in fifteen years to rupees 48000 crores. The stock market indices  are  crashing  down  across  the  Globe  including  India.  The  Bombay  Stock  Exchange  Index  lost  more  than  12000  points.  There  is  a  fear  of  hostile  takeovers  as  the  share  prices  are  crashing.  In  order  to  counter  this  trend,  the  Indian  Government  has  amended  the  Foreign  Investment  Rules  so  as  to  make  government  approvals  mandatory  for  certain  types of investments. China has criticized this amendment as opposed  to  the  World  Trade  Organization  principles  of  non-discrimination and free and fair trade. 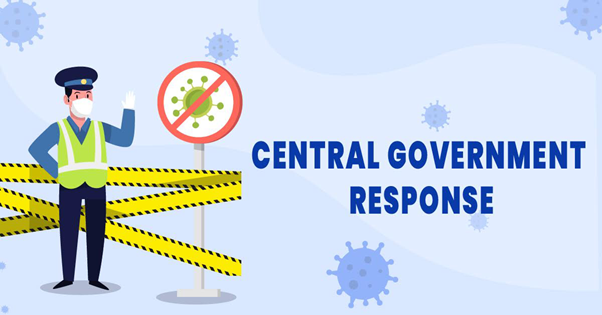 The   Central   Government   has   initiated   several   measures   to  combat  the  impact  of  COVID-19.  Though  shut  down  is  considered essential to deter the spread of the virus, Central Government  has  permitted  operation  in  certain  sectors  like  agriculture,  veterinary  services,  manufacture  of  fertilizers,  pesticides,   seeds,   movement   of   agriculture   equipment,   expansion  of  e-maundies  to  over  1000  etc.  Many  relief  measures have been provided to the poor and needy. Central.

Government has already transferred $3.9 billion (rupees 27300 crore approximately) through direct cash transfer to more than 320  million  people.  Under  the  Pradhan  Mantri  Garib  Kalyan  Anna Yojana 5 kg of food to be provided free for 3 months through TPDS (through Ration Shops under State Governments). The distribution through the Prime Minister Kizan Yojana Scheme, farmers  have  been  provided  rupees  3000  per  person,  thus  more  than  rupees  one  lakh  crore  has  been  paid.  More  than  20  crore  Women  Jan  Dan  account  holders  get  rupees  500  per  month  for  three  months.  Payment  of  ex-gratia  of  rupees  1000  to  more  than  3  crore  poor  senior  citizens,  poor  widows  and  poor  disabled  people.  In  order  to  provide  more  cash  to  the middle-class people in India, the Central Government has processed  more  than  10.2  lakh  Income  Tax  Refunds  in  one  week to release about rupees 4250 crores. Reserve Bank of India has initiated several measures like reducing the Reverse Repo Rate, releasing more than rupees 1.2 lakh crore Foreign Currency into the system etc.The Central Government has also provided for reliefs in many other areas like education, compliance and financial sector. School children studying in classes from I to VIII standard are to be promoted to higher classes without examinations. Time line for filing all Tax Returns have been extended by three months up to June 2020. All EMI payments time line extended by three months. Landlords are not to insist on payment of rent during lock down period etc.

Thus  far,  the  Central  Government  of  India  has  focused  on  formulating  and  implementing  the  Relief  Package  primarily  targeting  the  citizens  living  Below  Poverty  Line  including  Daily wage earners, migratory workers and the like. It is learnt that  the  comprehensive  Economy  Revival  Package  is  on  the  Drawing  Board  of  the  Government.  It  is  also  logical  that  any  Revival Package can be operational only after the shut down/Lock down is lifted, which is expected after 17th of May 2020. Due to unexpected crisis in Franklin Temple-ton Mutual Fund, RBI announced an immediate bail out plan for high risk Debt Mutual Funds to the extent of rupees 50000 crore designated as  SLF-MF  (Special  Liquidity  Facility  for  Mutual  Fund).  RBI has already infused rupees 3.74 lac crores through downward revision of the Reverse Rep Rates.FICCI has suggested to the Government to crate Bharat Self Sufficiency Fund with a corpus of rupees two lac crores to spur revival of the company and avoid dependence on imports and help local companies CII and FICCI have opined that any Revival Package to be announced by the Government should be at least between 2 to 5% of the GDP. which would work out to  rupees  4  to  5  lac  crores.  FICCI  has  emphasized  that  the  primary focus should be to enhance cash flow in companies to meet their working capital requirements by giving loans with interest subsidy along with back up Insurance for Banks.It  is  expected  that  after  the  shut  down/lock  down  is  lifted  at  least  partially,  the  Government  of  India  will  announce  a  Comprehensive  Economy  Revival  Package.  The  Honorable  Prime  Minister  of  India,  in  a  Nation  wide  televised  speech  on  12th  May  2020,  has  mentioned  that  his  government  has  prepared  a  package  for  the  revival  and  growth  of  the  Indian  Economy to the extent of ` 20 lac crore, the details of which will be announced later.

Bill  Gates  has  been  vehemently  stressing  the  argument  that  governments of Nations spend enormous amounts of money on Defence but very little on Research and Development in the field of medical science, especially in the field of development of   vaccines   against   viruses.   The   Governments   need   to   focus  more  on  such  research  and  healthcare  for  its  citizens  considering the fact that the loss and damage to citizens and the economy are greater than a world war. Another important area is regarding development of effective tools for enforcing and   implementing   obligations   on   Nations   in   respect   of   international  conventions  and  treaties.  China  is  a  member  of  the  World  Health  Organization  and  as  per  WHO  stipulations,  any member country should report occurrence of any serious contagious  disease  in  the  country  with  prescribed  particulars  to  WHO  within  24  hours  and  also  take  careful  and  effective  steps to prevent the spread of the disease. Though COVID-19 occurred in China as early as November 2019, China did not report immediately as required under WHO guidelines. WHO and other International Organizations should develop effective enforcement  tools  so  as  to  prevent  such  occurrences  like  COVID-19 in time to come.

Viibhor Agarwal is a Business & Brand Consultant as well as he is a Financial Expert his area of specialization is to guide Entrepreneur, Start-up’s and SME’s to build the brand value of business financially & legally. He has 8 year extensive experience in this sector